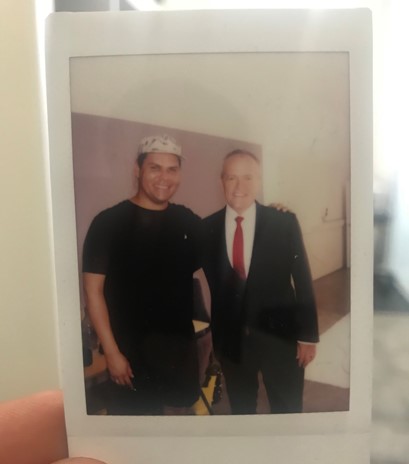 This week was a very exciting week at Blue Tree Studios, we had not one but two well-known Australians come into the studio.

World renowned artist and photographer Dr. Christian Thompson AO came and hired the studio to take some amazing portrait photos of Opposition leader Bill Shorten for his cover feature in The Monthly Magazine.

Christian is a regular visitor and collaborator with Blue Tree Studios and when approached by The Monthly his immediate thought was that the studio would be ideal for the shoot.  The team at Blue Tree provided a range of backgrounds, lighting and camera gear and were also on set to handle the technical side of things for Christian during the shoot.

With the studio close to the freeway from the airport, Bill was able to easily get to the studio after flying in directly from Townsville where he’d been visiting those impacted by the floods earlier that day.  It was great to have Bill, Christian and The Monthly collaborating in the studio and we love the final result of the shoot. See the outcome of the photo shoot

Subscribers can view the full article and portraits online here.

The hard-copy March edition of the Monthly is on stands now.

It’s always a pleasure having Christian come into the studio and watching his work and following his career. If you too have an upcoming photo shoot and you need some space please give us a call on (03) 9024 9958 As many of you may know, Bill Shorten is the leader of the Opposition (and Shadow Minister for Indigenous Affairs and Aboriginal and Torres Strait Islanders), and has been the Labor party leader since October 2013.

Shorten was born and raised in Melbourne, and graduated from high school at Xavier College followed by Monash University in Arts and Law (when he also became involved in the Labor Party). He also has an MBA from the Melbourne Business School. Shorten worked as a lawyer at the firm Maurice Blackburn Cashman after finishing his studies.

Shorten joined the union movement in 1994 when he began work at the Australian Workers’ Union as an organiser. Passionate about getting a fair deal for Australian workers, he became the AWU’s Victorian Secretary and then National Secretary. Shorten was also a director of Australian Super before entering parliament in 2007.

Shorten lives in Maribyrnong with his wife, Chloe and their three children. He barracks for Collingwood in the AFL and enjoys taking part in fun runs, reading and spending time with his young family.

His works are held in major international and national collections – in fact, since 2000, he has held 27 exhibitions around the world — from Ballarat to Bangkok, Sydney to Seoul, Noumea to New Hampshire..

In 2018 he was awarded an Officer of the Order of Australia for distinguished service to the visual arts as a sculptor, photographer, video and performance artist, and as a role model for young Indigenous artists.